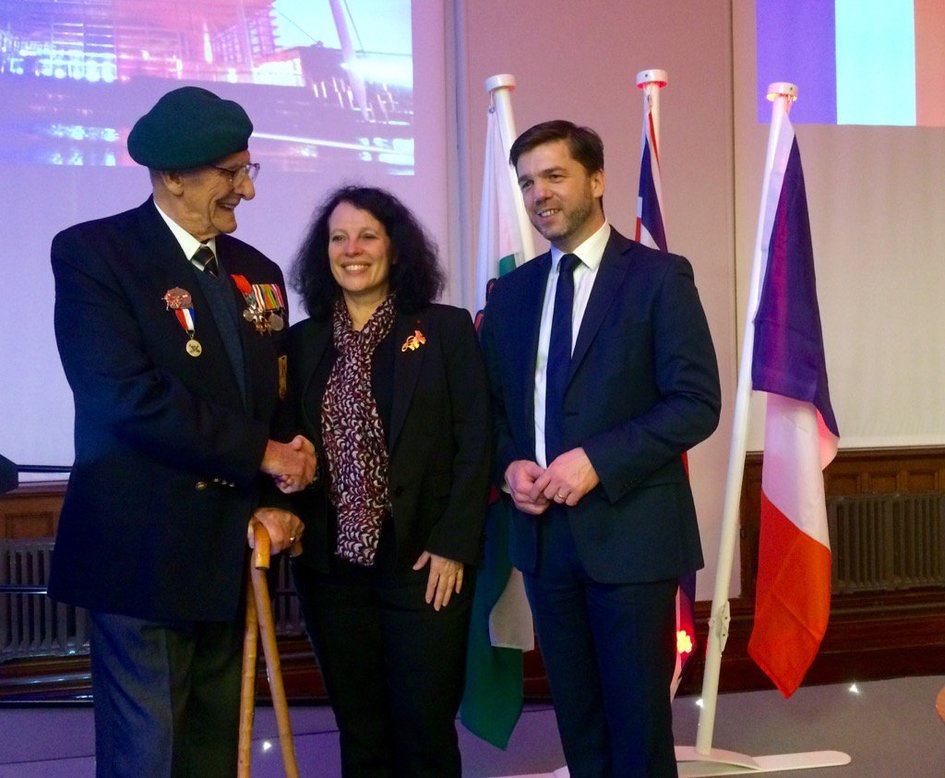 Twelve British World War II veterans have been presented with the Légion d’honneur, France’s highest distinction, during a ceremony at the National Assembly for Wales in Cardiff.

The medals were presented by the French Ambassador to the UK, Sylvie Bermann, in the presence of the Secretary of State for Wales, Stephen Crabb, the Minister for Public Services, Leighton Andrews, and the Lord Lieutenant of South Glamorgan, Dr Peter Beck. The Deputy Presiding Officer of the National Assembly for Wales, David Melding AM hosted the event and AMs were invited.

The veterans were honoured for their role in securing France’s liberation during the Second World War, with most having taken part in the June 1944 D-Day landings.

The medal ceremony follows a number of others that have taken place around the UK since the 70th anniversary of D-Day in June 2014, when President François Hollande pledged to honour all those British veterans who had served in France during the war.

The 12 veterans honoured are:

Ambassador Bermann said: “It is a great honour to present these 12 veterans with the Légion d’honneur. The medal is France’s highest distinction, awarded for acts of the utmost bravery.

“By awarding these medals we are showing our gratitude to these men for the service they paid to our country over 70 years ago. It is to them that we owe the freedom we enjoy today.”

Dr Peter Beck, The Lord Lieutenant of South Glamorgan said: "As HM The Queen’s Personal Representative in Wales’ Capital City, I am delighted to be present to witness HE The French Ambassador, Mme Bermann presenting the Legion d’Honneur – France’s highest award – to 12 Welsh veterans who served in France during the Second World War."

Secretary of State for Wales Stephen Crabb said: “I am immensely proud to attend this special ceremony.

“These are great men who displayed immense bravery and determination in the liberation of France. They now rightly take their place amongst a special group of brave servicemen and women to have been awarded the highest of French honours.”

Before the medal ceremony began, the Deputy Presiding Officer of the National Assembly for Wales, David Melding, presented a book of condolences to the French Ambassador following the 2015 Paris attacks.