21 veterans presented with the Légion d’honneur in Yorkshire 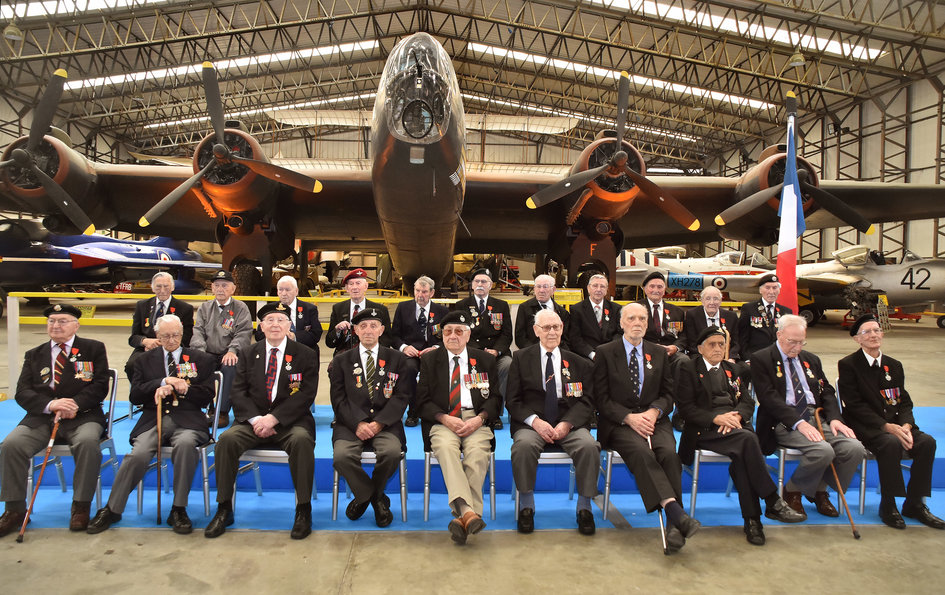 The Veterans with their medals seated in front of the recreated WWII Halifax Bomber "Friday the 13th".

The veterans were decorated in the impressive setting of the Yorkshire Air Museum’s “Canadian Memorial Hangar”, with the stunning visual backdrop of the historic and symbolic “Friday the 13th” aircraft, the type of aircraft that had been flown by French aircrews who took part in the daring raids on the Normandy coast on the night before invasion.

The Légion d’Honneur was presented to the veterans on behalf of the French Ambassador by the French Honorary Consul in Leeds, Mr Jeremy Burton, in the presence of Colonel Bruno Cunat, the French Air Force Liaison Officer to the Ministry of Defence. The City of York Civic Party also attended, along with senior representatives from the British Army, Royal Navy and Royal Air Force.

The Museum & Memorial has hosted three such ceremonies since April 2015, but this was by far the largest, with veterans from Lincolnshire and Northumberland, including Newcastle, Sunderland, Manchester, Leeds, York, Doncaster, Wetherby and Brighouse. The occasion proved to be a moment of pride and a poignant family gathering for the veterans who had served with the Royal Navy, British Army and the Royal Air Force during the war.

Museum Director, Ian Reed, commented: “This is a historic and increasingly rare event with these very special people who represent a fast decreasing number of veterans from a period of our past history which still affects us to this day. It was as we were expecting, a very emotional time for all the veterans, as they remember many lost colleagues and friends, but a day also of pride, particularly for the many family members supporting them on this special day. The applause for each veteran in turn, and indeed the spontaneous standing ovation was warm, heartfelt and thoroughly deserved.”

In fact, one veteran, Willie Riley, from Brighouse, West Yorkshire, received a double ovation, as it was announced by the French Consul that it was actually his 98th birthday that very day.