Home > Science & Tech > Research & Innovation in France > News from France > A Cooperation Agreement between CNES and UKSA to Tackle the Challenge of (...)

This cooperation agreement between the Centre National des Études Spatiales (CNES) and the UK Space Agency (UKSA) is a milestone that confirms the partnership launched within the Framework Agreement set up by the two agencies in January 2014.

The signature on April 19, 2017 of this agreement by CNES President, Jean-Yves LE GALL and UKSA Director of Growth, Catherine MEALING-JONES, in the prestigious Résidence de France in London, witnessed the Ambassador of France to the United Kingdom, Sylvie BERMANN and the UK Minister of State for Universities, Science, Research and Innovation Jo JOHNSON, confirms commitment of the United Kingdom in the ambitious space program MicroCarb, that was initiated by CNES at the start of this decade. 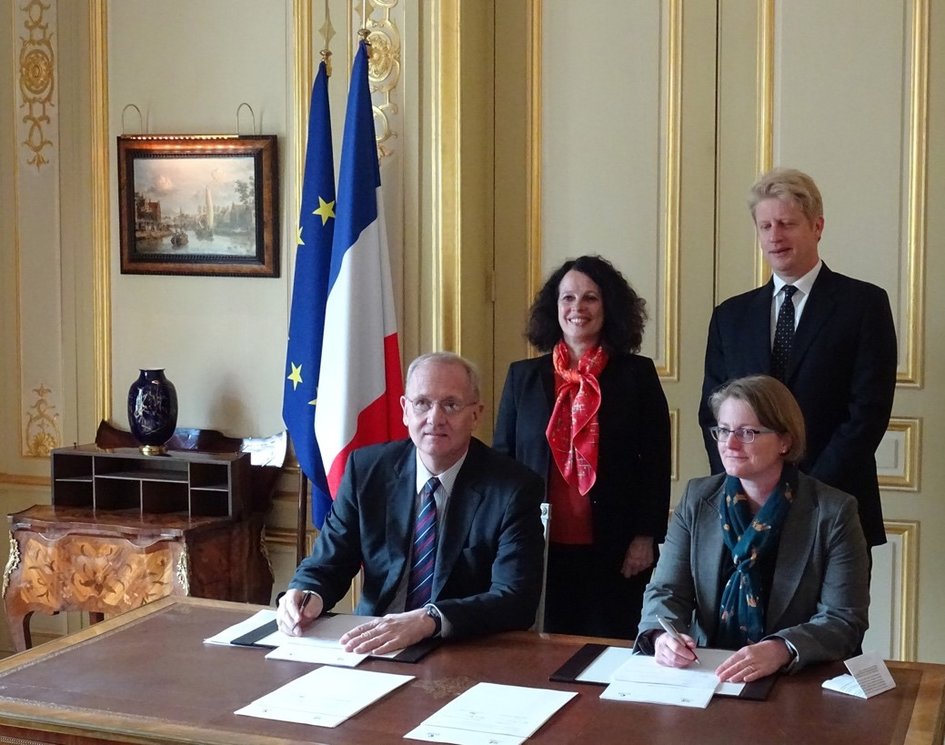 MicroCarb is a microsatellite aimed at measuring the concentration of Carbon dioxide in the atmosphere. The aim is to map, at the planet scale, the flows of this gas, that is a major contributor to the greenhouse effect and thus to the climate warming. The goal is to characterise the exchanges of this gas encompassing, on one side the major sources the quantities emitted by natural processes or human activities and on the other side the absorption capabilities of the main gas sinks on our planet: the oceans and the forests.

MicroCarb, whose launch is planned for 2020, will be the first European mission tackling this challenge. It will complement the efforts deployed towards this ends at the international level: GOSAT (Japan) launched in 2009, the OCO-2 system (USA) set up two years ago, and the TANSAT satellite (China) launched at the end of last year. Thus, this experimental mission will pave the way for a longer term operational system so as to address the resolutions of the Paris Agreement in 2015.

Beyond the support provided by UKSA for the development of some components of the satellite and of services for the mission, this agreement will allow for strengthening the work carried out by the academic scientific group on the analysis and processing of the observations, with the participation of UK research teams.

After the signature ceremony, the representatives of the two agencies gathered in a different lounge of the Residence to hold the first meeting of the Steering Committee of the MicroCarb programme. The partnership is thus already fully operational.