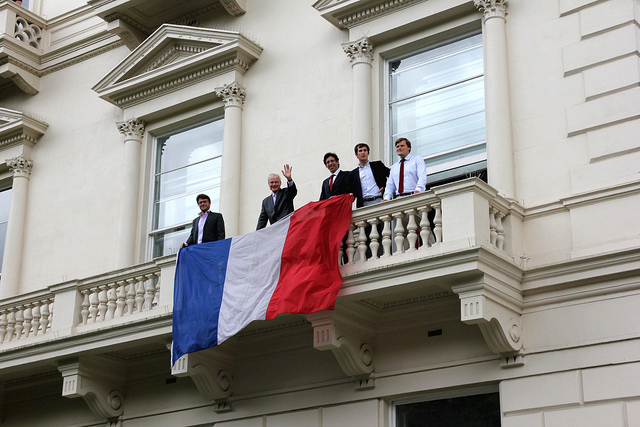 As I reflect on the last three years I have spent here in the UK, I am filled with both pride and great affection for this country and its people. Pride, in how France and the UK have worked together on many major international crises, from the joint intervention in Libya, to Syria and Ukraine. I am proud too of how we have strengthened relations between our two countries, from EDF’s huge investment in the Hinkley Point nuclear plant, to joint projects in defence, space exploration and technology. It was a privilege for me to have been in London for the French presidential and general elections in 2012, and to have helped establish the strong working relationship between President Hollande – who has visited the UK a remarkable five times – and Prime Minister David Cameron.

My feelings of affection for the UK began with the heartfelt welcome I received on arriving here in London, and have intensified as I’ve got to know this vibrant metropolis better and as I’ve discovered new places across the length and breadth of the country. I’ve had the opportunity during my stay to visit many of the UK’s leading cities – Manchester, Birmingham, Edinburgh and Belfast, to name just a few – and in each of them I have been struck by the warmth of the British people and thrilled to see how the Franco-British bond and mutual fascination between our two nations manifest themselves in different ways. From yellow jersey-wearing statues in Leeds city centre for last month’s “Grand Départ” of the Tour de France, to a new plaque in York to honour Yves Mahé, a French World War Two fighter pilot who saved the city from Nazi bombs, there have been some truly memorable sights to behold.

I have also had the great fortune to witness some once-in-a-lifetime events that have really shown off the best of British. The wedding of Prince William and Kate Middleton, Her Majesty The Queen’s Diamond Jubilee celebrations and of course the great triumph that was the 2012 Olympic and Paralympic Games - these unique spectacles showed me the fun-loving and free-spirited side of our British neighbours.

Nevertheless, the highlight of my mission was Her Majesty’s state visit to France in June this year. The visit was significant for two reasons: firstly, as a tribute – in this, the centenary year of the outbreak of the First World War – to the allied soldiers, including the French, whose courage on the beaches of Normandy 70 years ago gave France its freedom. And secondly, as this was the fifth state visit by a very special Queen with a particular soft spot for France and impressive command of its language, whose popularity amongst the French people was fittingly demonstrated by the renaming of Paris’s Marché aux Fleurs in her honour. At the end of the state visit, Her Majesty The Queen did me the great honour of conferring on me the high distinction of KCVO Knight Commander of the Royal Victorian Order, the cherry on the cake!

As I move on to my next posting, in Algiers, I can say with confidence that relations between our two countries are strong, bound in mutual projects, and forged by cherished and lasting relationships. It was an honour to have been tasked with getting to know this great country and reinforcing the ties between it and France. I wish my successor, Sylvie Bermann, the very best as she arrives in London to continue this work. Thanks to France and the UK’s shared history, our healthy rivalry and a common quest for greater innovation, progress and justice in the world, the ties between our countries grow ever closer and more vital than before.