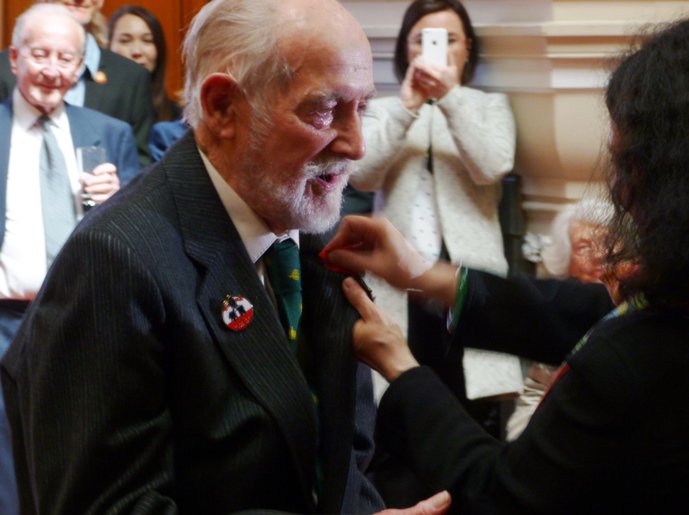 During her visit, the Ambassador met the Bailiff, Mr William Bailhache, the Chief Minister, Senator Ian Gorst, and the Minister for External Relations, Senator Sir Philip Bailhache, as well as other ministers. She attended a meeting at the Financial Services Commission and had an in-depth discussion with its director.

The Ambassador laid a wreath at St Thomas’ Church in memory of French residents of Jersey who died during the First World War. She also attended a reception for French nationals at St Helier Town Hall, and presented the Légion d’honneur to seven Jersey D-Day veterans at the Old Library in the States Building.

The Ambassador said in her speech: "The Channel Islands were the only part of Britain to endure years of occupation by the German army during the Second World War.

"Those left on the island suffered a terrible period of near-starvation in the winter of 1944 to 1945. So Jersey, more than anywhere else, felt the impact of the Normandy Landings, that extraordinary turning point in the Second World War which brought hope to Channel Islanders and the promise of liberation to France."

She also praised Jersey’s commitment to the improvement of tax transparency, its recent commitements in the wake of the anti-corruption summit held in London and the sound dialogue between Jersey’ and France’s administrations.

The Ambassador also visited Mont Orgueil, met business and finance industry representatives, attended meetings at the Maison de la Normandie et de la Manche and the Alliance Française de Jersey, whose 20th anniversary was celebrated on the occasion, and was guest of honour at a dinner hosted by the Bailiff.