Summary of France’s relationship with the United Kingdom 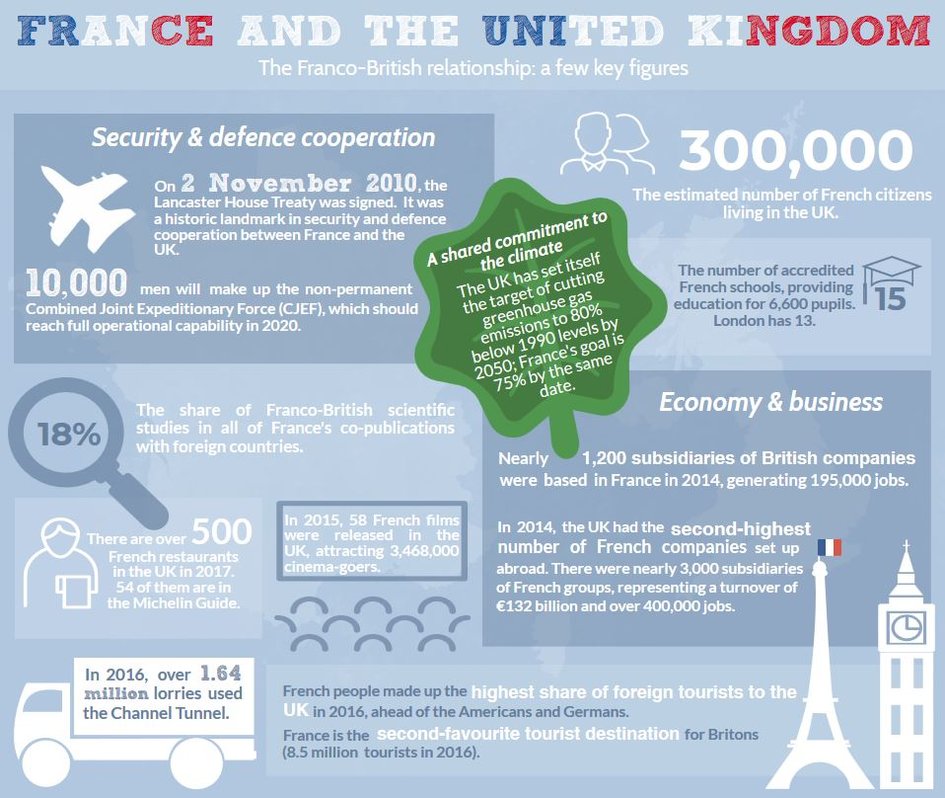 Political relations Our bilateral relations are driven by regular contacts at all levels, including summits. As the only European countries that have nuclear weapons, are permanent members of the United Nations Security Council and have international ambitions with the political and military tools to match, our two countries often share similar approaches.

Defence cooperation is the most crucial element of our bilateral relationship. Our two countries’ defence budgets account for half of the European Union’s. Our cooperation falls under the framework of the Lancaster House treaties of 2010 and comprises the operational aspect, arms cooperation, and closer ties between our defence industries. Progress on our cooperation in these three areas is monitored in dedicated formats, with regular meetings.

2016 saw very positive results in each of these three areas: the declaration of the Combined Joint Expeditionary Force’s operational capability as a binational force of up to 10,000 troops capable of being deployed at very short notice and conducting high-intensity operations; the launch of the development phase of the new generation of FCAS fighter planes; and the signature of an agreement to forge closer links between our missile industries. The UK provided logistical support to French operations in Mali and the CAR, demonstrating the quality of our defence cooperation. The 2015 SDSR supports the continuation of our bilateral cooperation under the Lancaster House treaties.

£50 million (€62 million) was allocated to the United Kingdom’s commemoration programme, covering, in addition to the ceremonies to mark the UK’s entry into the war (4 August 2014), the events marking the beginning of the Battle of the Somme (1 July 2016) and other events to mark the Battles of Jutland, Gallipoli and Passchendaele and the signing of the Armistice (11 November 2018).

French visits to the United Kingdom

• 28-29 September 2015: visit by the Minister of State for Veterans and Remembrance, M. Jean-Marc Todeschini.

• 11 November 2015: visit by the Minister of State for Digital Affairs, Mme Axelle Lemaire.

• 12-13 September 2017: visit by M. Benjamin Griveaux, Minister of State attached to the Minister of the Economy and Finance

• 16 November 2017: visit by Gérard Collomb, Minister of the Interior

• 3-4 December 2019 : visit of President Emmanuel Macron to London for the NATO summit

• 15 February 2015: visit to Paris by David Lidington, Minister of State for Europe.

• 27 July 2015: visit to Paris by Chancellor of the Exchequer George Osborne.

• 28 May 2018 : visit of Minister of State for Africa at the Foreign and Commonwealth Office, Harriet Baldwin

• 9 November 2018: visit of Prime Minister Theresa May (visit to the Thiepval memorial)

• 11 Novembre 2018 : visit of the Chancellor of the Duchy of Lancaster, David Lidington (commemorations of the armistice of 1918)

• 6 June 2019 : visit of Prime Minister Theresa May for the 75th anniversary of D-Day, placing of the first British memorial stone at Ver-sur-Mer.

With 5.8% of its market share, France is one of the UK’s main trading partners. According to French customs, French exports of goods to the UK increased to €31.8 billion in 2016 (fifth-largest customer) compared to €23.2 billion for British exports to France (seventh-largest supplier).

France also had a surplus in terms of trade in services (€3.1 billion) in 2016, largely thanks to transport and travel services. Trade in goods and services has remained stable over the past four years, although it is less substantial than 10 years ago (€50.6 billion in 2016 compared to €57 billion in 2007).

In terms of investment, in 2016 the UK was the fourth destination country for French FDI stocks (8.1% of total stock), while the UK was the third-largest foreign investor in France (11.7%), behind Luxembourg and the Netherlands. In 2015, France was the source of 116 investment projects in the UK (8,000 jobs), compared to 81 projects in France for British investors (3,000 jobs).

These close ties are demonstrated in several top-priority economic projects, including EDF’s construction of two EPR reactors at Hinkley Point, worth a total of £18 billion. Recently, Veolia won two calls for tender to build and operate an incineration plant and to recycle and manage waste in north London (£338 million). PSA has also established itself in the country, purchasing Vauxhall (Opel) for €900 million (35,000 jobs and two factories in the UK).

Cultural and scientific exchanges, which involve a large number of people, are developing through direct links between universities, museums, institutes, research centres and foundations. Our cooperation seeks to promote the French language and the teaching of it, debate, and academic cooperation in the humanities, particularly with Cambridge. There is also an ongoing policy of supporting the cultural industries and French exporters on what is a highly buoyant market in many areas, including contemporary music, contemporary art, publishing, cinema and the audiovisual sector, and video games.

The bilateral administrative arrangement on educational cooperation, signed on 9 June 2006, provides an official framework and momentum in this sector (teacher training, school partnerships and exchanges on themes of common interest). The UK remains the Western European country (excluding Belgium and Switzerland) where French is most widely studied.

There are close to 14,000 French students in the UK, while about 3,000 British students are studying in France.

Other types of cooperation

Cooperation in combating illegal immigration is a priority of the UK authorities and of our bilateral cooperation, which is multi-faceted and implemented in the framework of a series of bilateral agreements, in particular the 1991 Sangatte Protocol and the Le Touquet Treaty of 4 February 2003. In particular, it involves the implementation of border checks in the Channel and North Sea ports and the organization of juxtaposed control stations, especially on the Channel Tunnel Fixed Link. Respective information centres have been set up in Calais and Folkestone.

The 20 August 2015 declaration by the French Interior Minister and the Home Secretary set out a road map for developing enhanced bilateral cooperation, particularly in the context of the migration crisis. Our priorities are to dismantle people-smuggling rings, establish dialogue with countries of origin and transit, and support vulnerable people.

The current legal regime applicable to the Channel Tunnel Fixed Link is defined by the provisions of the Treaty of Canterbury of 12 February 1986 concerning the Construction and Operation by Private Concessionaires of a Channel Fixed Link and the provisions of the quadripartite Concession of 14 March 1986 between the French and British governments and the concessionaire, Eurotunnel. An Intergovernmental Commission (IGC) was established “to supervise, in the name and on behalf of the two governments, all matters concerning the construction and operation of the Fixed Link.” It holds regulatory powers as regards the Fixed Link.

Every year, between 30 and 40 talented French and British under-40s will be selected by a jury led by Patricia Barbizet, former CEO of Christies, from fields as varied as business, the arts, media, academia, social affairs, government and the military. The programme aims to increase mutual understanding and cooperation between French and British societies up to the highest level, enabling future leaders from both countries to develop a culture of exchange.

The programme began in summer 2017 with a first cohort and a session in the UK.