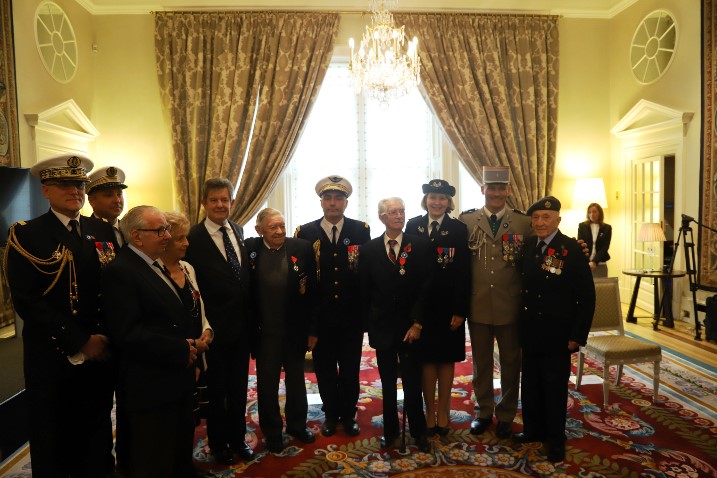 French Ambassador Jean-Pierre Jouyet presented five British veterans with the Légion d’honneur for their role in the liberation of France during World War II.

During a ceremony at the French Ambassador’s Residence in London, Ambassador Jean-Pierre Jouyet said: “Receiving the Légion d’honneur is no small affair. This honour recognizes the bravery and the sacrifices exceptional individuals made for France. It is our duty to remember and honour the actions of the brave men and women who helped liberate us during World War II.”

The veterans who were decorated are:

Ruth Bourne, 92, from Birmingham, who worked at Bletchley Park as one of the team helping Alan Turing crack the Germans’ Enigma code.

Alfred Hicks, 93, for his service as sergeant and cameraman in the RAF film production unit. Mr Hicks landed on Sword Beach on D-Day and filmed the landings, before moving on to the outskirts of Caen.

Thomas Stonehouse, 92, for his service as a private in the 2nd Essex Regiment. Mr Stonehouse landed on Gold Beach on D-Day, fought in Bayeux the next day, and subsequently joined fighting in Caen. He later entered Belgium, Holland and Germany.

Joseph Randall, 95, for his service as as a corporal in 5022 Squadron of the RAF’s Airfield Construction Branch. Mr Randall worked on the construction of advanced landing grounds.

Albert Avann, 93, for his service as an RAF flight sergeant and Lancaster Rear Gunner. Mr Avann flew missions throughout June 1944, attacking key targets in France, including Le Havre and Calais.

In addition, Jean Barker, Baroness Trumpington, 96, was decorated by the Ambassador on 6 November 2018. She was recruited to the naval intelligence code-breaking team at Bletchley Park. She helped to crack German naval communications, alongside legendary mathematician Alan Turing. Sister Pamela Hussey, 96, will be decorated later this month. She served as a wireless telegraphist special operator at the Scarborough military base. In her role, she intercepted, listened to, and transcribed enemy communications in Morse code, before sending them to Bletchley Park to be decoded.

These decorations follow a number of others that have taken place around the UK since the 70th anniversary of D-Day in June 2014, when former French President François Hollande pledged to honour all British veterans who had served during D-Day. France has so far had the privilege of decorating more than 5,500 veterans across the country.

The Ambassador made the following speech at the ceremony:

It’s a very great honour for me to host you at the French Residence today to recognize and express our country’s heartfelt gratitude to soldiers who helped liberate France during the Second World War.

At a time when Europe was in the grip of a terrible dictatorship, France was able to count on the support of its closest partner, from the very first hours of the war.

Our societies’ fundamental commitment to the law and democratic principles inspired a joint battle for freedom. The United Kingdom spared no efforts or sacrifices in the conflict, particularly during the allied landings on the Normandy beaches. So William the Conqueror’s descendants returned to the continent to recapture their region, not to occupy but to liberate it.

As a Norman, I’m still very touched by the extraordinary bravery you showed, crossing the Channel in bad weather and heading straight towards the German defences. With the terrible fear, volleys of gunfire and bombardments all around, the atmosphere was electric and the tension acute. Then bitter fighting broke out in the countryside. Many were wounded in the harsh clashes. The engineers’ work was crucial, not only to clear obstacles and booby-traps but also to enable you to cross waterways whose bridges had been destroyed. In the skies, the support missions conducted by allied bombers were equally risky, with incredibly violent barrages of fire from the anti-aircraft defences. The plane crews continued their missions despite the danger. Unfortunately some aircraft were hit and crashed into the sea, like the one lying 15 metres below the surface west of the island of Cézembre, off Saint-Malo. Gentlemen, you selflessly endured all these ordeals, risking your lives. France owes you a huge debt.

Yet the din of combat, however deafening, must not eclipse the activities carried out in the shadows, which were certainly as important as the armed conflict. Many young women, who were in their carefree youth but also confronted by the gravity of a terrible event, joined the Women’s Royal Naval Service, and thus enlisted in the ranks of those fighting in the shadows.

The UK’s considerable efforts to unlock the secrets of the German encryption machine Enigma are now seen as one of the country’s major successes during World War II. That success had its origins at Bletchley Park, 50 miles north of London, at the Government Code and Cypher School – the precursor of today’s GCHQ.

However, just like the Great War victory, which was that of a coalition and not a single country, this success was also due to the work of a shadow coalition started in the pre-war period. In this respect, the work of Dermot Turing is particularly enlightening, recognizing the joint efforts by the British, French and Polish services that enabled Alan Turing to develop his famous Bombe, the electro-mechanical machine that deciphered the German communications code.

The results of the work to decipher Germany’s coded messages benefited all the allied forces. On the very day of the Landings, Bletchley Park relayed strategic and tactical intelligence to General Eisenhower about Germany’s intentions and its positions. Armed with this advantage, General Eisenhower was able to conduct his operations shrewdly, successfully complete the Landings and reduce allied loss of life.

British nationals awarded the insignia of Chevalier in the Ordre national de la Légion d’honneur embody all aspects of the work conducted at Bletchley Park from 1939 to 1945:

the interception of German communications,

sending the information gathered to the political authorities and allied military decision-makers,

Through this award, France wants to honour those who, by their action in an intelligence service, gathered, analysed and passed on information which contributed to France’s liberation.

In the same way as your brothers-in-arms here today, you are a perfect example of individuals who deserve our gratitude and thanks.