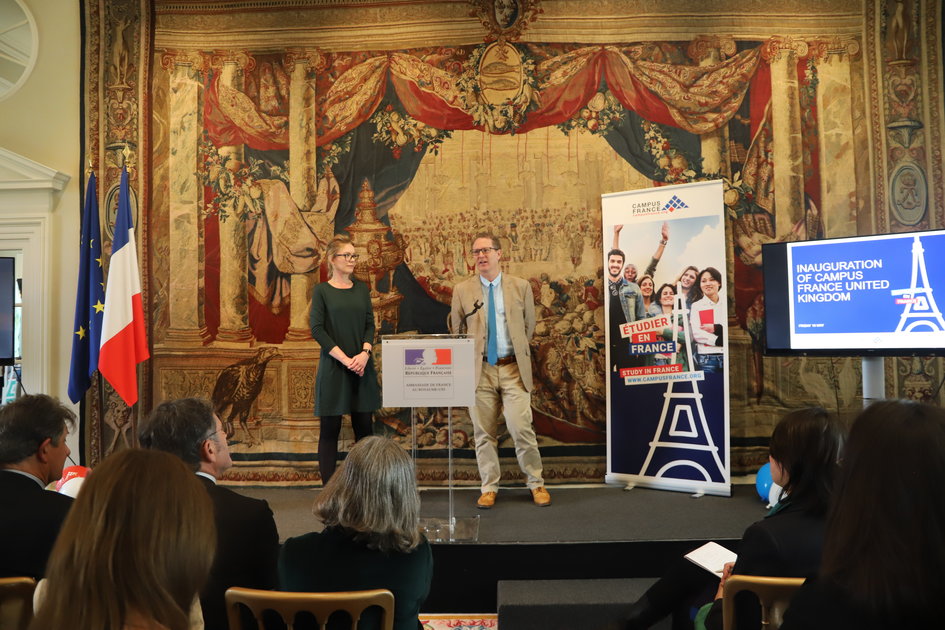 In 2017-2018, 4,213 students from the United Kingdom chose France for their postsecondary studies, some of them benefiting from the 1400+ programmes taught in English in France.

On Friday 10 May 2019, Campus France, a public institution in charge of promoting French higher education abroad and welcoming foreign students and researchers to France, inaugurated its London office within the Higher Education, Research and Innovation Department of the French Embassy in London, in presence of the following speakers:

Jean-Pierre Jouyet, Ambassador of France to the United Kingdom

The main assignment of the Campus France offices, present in more than 126 countries, is to promote French higher education to students in the countries in which they live. In particular, the offices can provide information on the programmes that exist in France, help students develop their goals and accomplish the administrative procedures required to see them become reality. They are also tasked with welcoming foreign students and researchers to France and implementing scholarship and mobility programmes.

The strategy is part of a global communication campaign which aims to increase France’s presence and influence abroad and includes the simplification of visa procedures and policies, doubling the number of programs taught in English and in French as a foreign language, differentiated tuition fees for non-European students and tripling the number of French government scholarships.

In the current context for Franco-British relations, France’s ambition is to counter the unbalanced students’ flow between France and the UK and the uncertainties of Brexit and the future relations between the UK and the European Union.

The event will also be an opportunity to reaffirm the importance of the relationship between France and the United Kingdom in Higher Education and Research, and to bring together the French and British representatives of higher education institutions, students and alumni, decision makers, and the main institutions in the field (UUK, Department for Education, British Council, Russell Group, Campus France, CPU, MEAE).