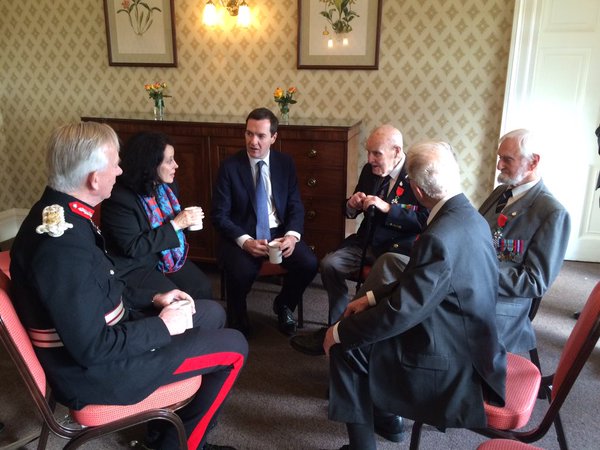 Three British World War II veterans have been presented with the Légion d’honneur, France’s highest distinction, during a ceremony at Tatton Park in Cheshire.

The medals were presented by the French Ambassador to the UK, Sylvie Bermann. She was joined by the Rt Hon. George Osborne MP, Chancellor of the Exchequer and MP for Tatton.

The veterans, who all took part in the D-Day Landings in June 1944, were honoured for their role in securing France’s liberation during the Second World War.

The medal ceremony followed a number of others that have taken place around the UK since the 70th anniversary of D-Day in June 2014, when President François Hollande pledged to honour all those British veterans who had served in France during the war.

Ambassador Bermann said: “It is a great honour to present these veterans with France’s highest distinction. Their bravery over 70 years ago on the beaches of Normandy helped secure our country’s freedom. We will never forget their courage and the sacrifices they made.

“I’m delighted that the Chancellor of the Exchequer is here to share in this very special occasion, which is also a celebration of the strength of the Franco-British alliance. In World War II we stood shoulder-to-shoulder to defend liberty, and we are doing so again today.”

Chancellor Osborne said: “It was a great honour to meet Mr Iredale, Mr Lasham, Mr Glennon and their families.

"They are so modest about their service to their country, so I am delighted that their heroism has been recognised by France as well as the British public. We owe them an enormous debt of gratitude and will never forget their sacrifice and it’s a reminder of the close friendship between our two nations.”

During her trip to Cheshire, the Ambassador also visited Wilmslow High School, accompanied by Chancellor Osborne, where they met students studying French.