Our embassy has commemorated the anniversary of the General de Gaulle’s Appeal, which he made over the airwaves of the BBC in London on 18 June 1940.

The 18 June Appeal, a speech which founded the French Resistance

Following the resignation of French Prime Minister Paul Reynaud on 16 June 1940, Charles de Gaulle left for the United Kingdom the next day to carry on the fight.

He temporarily moved into a flat at 6, Seymour Place, near Hyde Park in central London, loaned to him by a Frenchman.

From London on 18 June 1940, over the BBC’s airwaves, General de Gaulle exhorted the French people not to give up fighting the Occupation. Heard only by a minority of people in France at the time, the Appeal is now regarded as the founding text of the French Resistance, which it symbolizes.

Since it was already preparing to record another speech being given that day by Prime Minister Winston Churchill, the BBC did not record de Gaulle’s speech. However, a recording was made on 22 June, which is available here.

In July 1940, 1,000 posters reading “To all French people” were displayed in London and other British cities. Signed by General de Gaulle from his headquarters at 4, Carlton Gardens, London, this new appeal was aimed at both soldiers and civilians, regardless of their profession, social background or where they lived. The slogan “France has lost a battle! But France has not lost the war!” was to become famous. 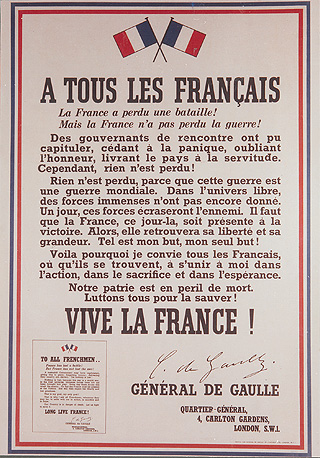 To mark the 77th anniversary of the Appeal of 18 June 1940, French Ambassador to the United Kingdom Sylvie Bermann celebrates this key moment in the history of “Free France” and this defining episode in the history of Franco-British relations:

This strong bond continues today, despite the United Kingdom’s decision to leave the European Union. These relations are especially close and substantive when it comes to defence and security, and are more necessary than ever to enable us to face up to the trials of our time, when terrorism is hitting our two countries hard.

Seventy-seven years after that display of solidarity between the two peoples, the permanence of the bilateral relationship is reflected among other things in defence cooperation, which was increased by the 2010 Lancaster House treaties.

France and the United Kingdom, both members of NATO, are the only European states to possess all the military capabilities required for high-intensity operations. Our defence budgets alone equal half those of all the other EU member states combined.

This ambitious cooperation is unmatched. The United Kingdom’s departure from the European Union should not have a direct impact on this cooperation, conducted within a strict bilateral framework; our defence relationship is more necessary than ever, given the dangerous and intense crises developing on Europe’s periphery.