On 11 and 12 October, France took part in the Illegal Wildlife Trade Conference in London. It has made strong commitments on the issue. 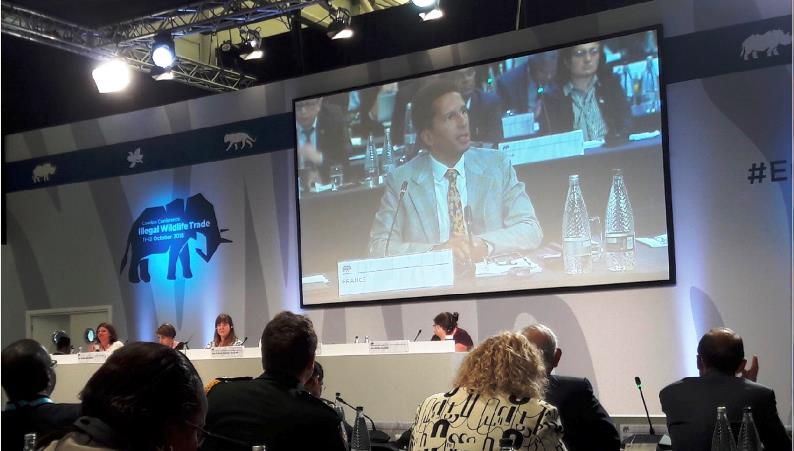 French Ambassador for the Environment Xavier Sticker speaking at the conference.

At national level, the act of 8 August 2016 for the restoration of biodiversity, nature and landscapes increased penalties for the illegal trade in wildlife. In its national biodiversity plan, adopted on 4 July 2018, France pledged to step up cooperation between police and monitoring services by establishing a steering committee chaired by the Minister responsible for customs and the Minister for the Ecological and Inclusive Transition in 2018.

France’s efforts to combat the illegal wildlife trade are also reflected in its official development assistance. In 2017, it allocated more than €340 million to development assistance supporting biodiversity. Part of this budget went to the fight against trafficking and to the protection of wildlife. For example, a project worth €10 million is under way with Gabon. Another, worth €8.5 million, is being conducted with Mozambique. Work to prepare a project totalling several million euros has started in Cameroon, Chad and Niger. Furthermore, a high-level Chadian delegation is currently visiting Paris as part of a capacity-building programme, led on the French side by the National Office for Hunting and Wildlife.

Regarding the institutional framework of the action, France has also pledged to take ambitious stances under the Washington Convention on International Trade in Endangered Species of Wild Fauna and Flora (CITES), including on precious wood and species belonging to ordinary biodiversity such as holothurians.

In 2016, France was the first European country to close its domestic elephant ivory market. Together with its African partners in the African Elephant Coalition, it led the battle, before the last Conference of the Parties to CITES, to ensure that measures to close ivory markets were taken worldwide. The United Kingdom made this issue one of the central themes of the London conference, thus increasing the momentum created on the issue.