Provence flavours were on the menu at the French Residence, as 50 restaurants around the UK join in the annual worldwide celebration of French food and drink 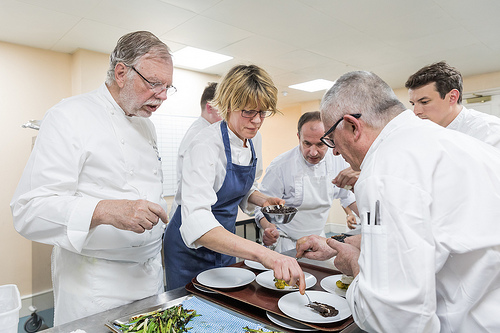 Ambassador Jean-Pierre Jouyet has hosted the Good France / Goût de France gala dinner at the French Residence as 50 restaurants around the UK participated in the annual celebration of French food and drink.

Residence chefs Gilles Quillot and Romain Barbier were joined by renowned French chef Jean-André Charial and The Modern Pantry’s Anna Hansen in serving a menu based on specialities from Provence.

The Ambassador said: “I’m particularly proud that this year’s Good France edition is dedicated to highlighting the unique southern delicacy of “provençale” cuisine while promoting sustainable and responsible cooking. Good France 2019 illustrates how French cuisine, at its roots, is sustainable, without sacrificing on health or taste.”

The Ambassador thanked all the chefs in the UK who were taking part in Good France 2019, many of whom attended the official launch at the French Residence on 11 March.

Ahead of 21 March, the Ambassador had also discussed French gastronomy over lunch with Sky News’ Kay Burley.

Pictures were provided by photographerJérémie Souteyratand are available on the French Embassy Flickr page. View them by clicking the image below.

Sustainable food on the menu in Goût de France 2019