* Despite the ideals it proclaimed, the French Revolution rapidly became a military dictatorship. The fight for power raged until the coup d’état of the successful general Napoleon Bonaparte and he took power on 18 Brumaire (9 November 1799). Did you know that there was a special French Republican calendar? 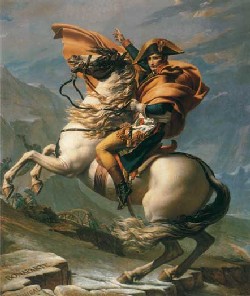 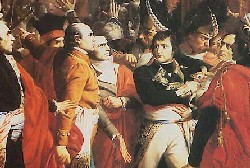 * Napoleon became First Consul and gradually restored order and organized France’s finances, administration and justice system. Already popular, he became a national hero when he returned victorious from fighting the Italians. On 2 December 1804, in the presence of the Pope, he was crowned emperor in the famous Paris Notre Dame cathedral. 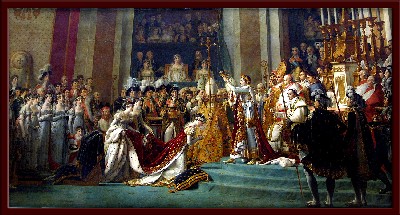 * Napoleon’s first decade as Emperor was hugely successful. He fought almost every European nation, often allied against him, and, a first-class general, conquered almost the whole of Europe, winning some famous victories including the battles of Jena, Wagram and Austerlitz.

* But he was too ambitious and increasingly authoritarian. In 1811, he invaded Russia. Surprised by the harshness of the winter, he was forced to evacuate his army in terrible conditions; the French suffered huge losses, including thousands when the army tried to cross the Berezina river (now in Belarus). With Napoleon in difficulty, the European States once again allied against him and invaded France. Paris was taken and Napoleon abdicated on 6 April 1814.

Napoleon was then exiled on the island of Elba, whilst Louis XVIII reigned in France. But the king was unpopular, and Napoleon managed to escape and return to Paris where the people gave him a warm welcome. The coalition of European forces then came together one last time to confront Napoleon at Waterloo in 1815. With half as many men as the Duke of Wellington’s Allied army, he suffered a final defeat and was definitively exiled on the tiny island of Saint Helena, where he ended his days writing his memoirs. 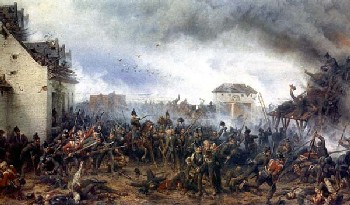