Finally, France chose to be a Republic, with a president and not a king. Proclaimed in 1870, the Third Republic lasted until 1940. In 1904, France and Britain signed the Entente Cordiale, an alliance and friendship still thriving today. In 1914, the French endured the terrible ordeal of the First World War, fighting alongside Britain against Germany. 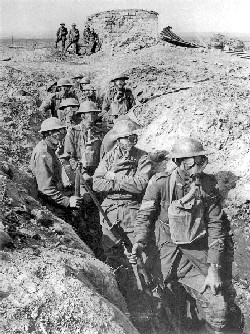 Soldiers in the trenches during the First World War.

After the war, France was bruised and battered and had difficulty getting back on her feet economically and politically. But she managed to do so and major social progress was achieved by the Popular Front, a left-wing political coalition elected in 1936. 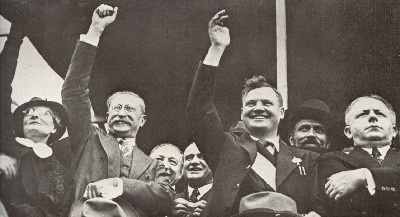 Victory of the "Front Populaire" in 1936. From left to right: Mme. Blum, Léon Blum (SFIO), Maurice Thorez (PCF), Roger Salengro (SFIO, minister of the Interior). In the second row, behind Blum and Thorez, (rolling a cigarette) is Edouard Dalladier ( Parti Radical , defense minister).

In 1939, the Second World War broke out. France was invaded by Nazi Germany. General de Gaulle organized the Resistance from London. France’s allies, with the United States and Britain at the forefront, landed in Normandy in June 1944. Paris was liberated in August 1944. After the defeat of the Germans, General de Gaulle created a provisional government, but left the political scene before the adoption in October 1946 of the Constitution of the Fourth Republic. 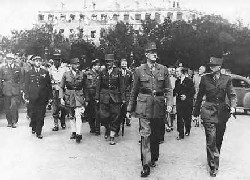 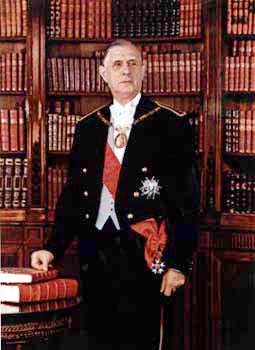 The Fourth Republic, 1946-1958, began the rebuilding of France and saw the development of the European Economic Community (EEC). But there was a major conflict in Algeria, then under French rule, and the government could not maintain order. In 1958, General de Gaulle was called back to bring stability. He proposed the institutions of the Fifth Republic which were approved by referendum. He was twice elected President of the Republic (in 1958 and 1965). Less popular after the student protests in May 1968, he retired in March 1969.