After capon, foie gras, seafood, Yule log and other festive delights, now is the time for the famous galette des rois or Epiphany cake, traditionally savoured on 6 January, the feast of Epiphany or Twelfth Night. The French love this delicious pastry, but how many of us actually know its origins? 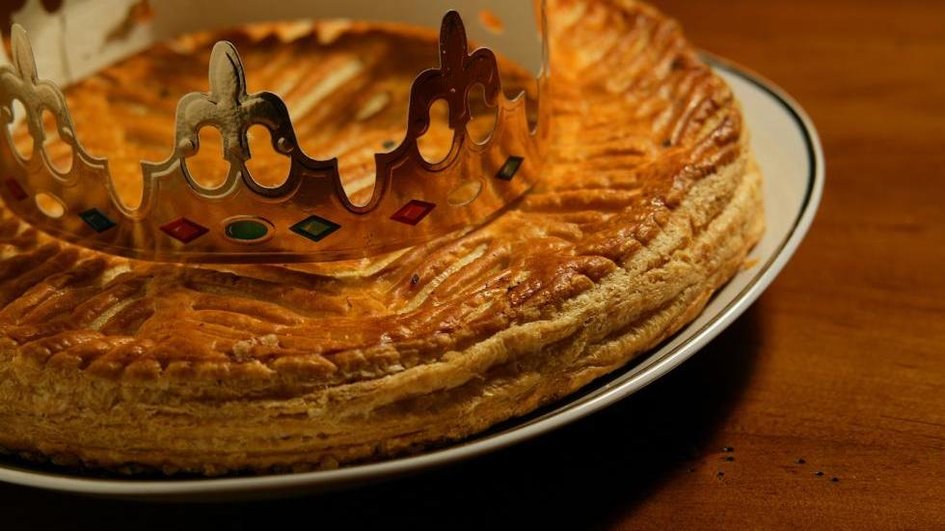 Epiphany marks the visit by the Three Kings or Magi to the baby Jesus. At the feast, the tradition is for guests to “find the king”. The cake is sliced into equal portions, and whoever finds a little figurine (known as a fève or bean) inside their slice is crowned king or queen.

Origins of the galette

For centuries the galette des rois has been tied to the Christian feast of Epiphany, celebrated on 6 January – when guests try to “find the king”. However, like many religious feasts, it originated in a wholly pagan ritual. Only later did it become a culinary tradition marking the day of the Magi’s arrival.

The first traces go back to ancient Rome: during the Saturnalia festival in late December, the Romans used white or black beans to elect a slave “king for the day”. Under France’s Ancien Régime, it was customary for people to offer pastries – known as gâteaux des rois or kings’ cakes – to the local lord while paying their feudal dues. Then, amid the anti-monarchist fervour of the French Revolution, there was an abortive attempt to ban the tradition.

The Concordat of 1801 between Napoleon and the Pope set 6 January as the date for Epiphany. Only then did the long-term tradition of galettes des rois take hold in France.

The first galettes were simple affairs, more closely resembling biscuits or bread rolls than pastries. Since then, two types have existed:

• In northern France, a puff pastry often filled with frangipane – the renowned galette de Pithiviers. Its circular shape, representing the sun, symbolizes the return to light after the long winter months.

• In the south, the tradition is for the galette to be shaped like a brioche or a round cake, usually filled with glacé fruit!

There may be varieties of galette in France, but they all share two features: a fève and a crown.

• the traditional galette des rois (or Pithiviers): filled with frangipane, it is still the favourite among French people;

• the gateau des rois: a crown-shaped brioche, similar to a galette filled with glacé fruit.

Recipe: how do I make my own?

For the frangipane: beat 80g of sugar with 80g of butter at room temperature. Whilst beating continuously, add a whole egg, then ground almonds and another egg. Finish with a drop of bitter almond extract.

For the puff pastry (homemade or shop-bought): work the pastry, then divide into two equal parts. Roll out each part in a circle (you can use a lid or plate for this). On one part, spread the frangipane, taking care to avoid the edges, which you will brush with egg yolk. Put the fève into the frangipane. Place the second part of the pastry over the first, pressing the edges to seal. Brush with egg yolk. Leave for 45 minutes. Brush with egg yolk again and lightly score the pastry with horizontal and vertical lines (without cutting it!). Bake for 20 minutes.

• To make a brioche galette from southern France

The day before: crumble 10g of baker’s yeast in 80ml of warm milk (10 minutes). Knead the dough (280g of flour, yeast and milk, one egg, four tablespoons of sugar and a pinch of salt) for about 15 minutes then add 70g of diced soft butter and the glacé fruit, and of course the fève! Leave to rest for one hour at room temperature, then place in the fridge overnight.

G-Day: knead for a few moments, make a hole in the middle and shape into a crown. Leave to rest for two hours. Glaze with egg, decorate with pearl sugar or glacé fruit. Bake for 20 minutes at 150ºC.

MasterChef at the French residence