On Monday 27 January the French Residence in London hosted the “Women in Law: a Women’s World?” seminar, which discussed the current representation of women in law, the discrimination they might face and whether male and female judges work in the same way 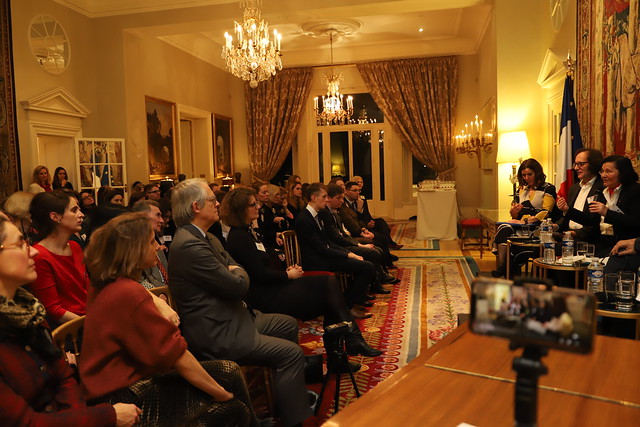 In France, the first female lawyer took the oath in 1900, but women were not permitted to enter the judiciary until 1946. Women are in the majority in these two professions today (55% of lawyers and 66% of judges).

Comparatively, in the UK, women joined the legal professions thanks to the adoption in 1919 of the Sex Disqualification (Removal) Act. Since 2018, although women have been very much in the minority when it comes to barristers, with 4,617 of them compared to 8,476 men, female solicitors have outnumbered their male colleagues (50.1%). So the profession has a growing female presence in both countries.

Our roundtable on 27 January aimed to provide not just a French and British perspective but a sociological, institutional and professional exchange of views on the fact that more women are joining the legal professions.

A panel of experts provided an overview of the phenomenon to better understand the causes and think about the potential repercussions. There were three main parts:

3) Consequences: does the increasing proportion of women justify public intervention?

The panel of experts, chaired by Sandra Fredman, Professor of Law at Oxford University, discussed all three questions based on their own professional expertise. The speakers were:

Watch the full conference below

En direct | Women in Law: a Women’s World at the French residence. https://t.co/LLC0HtbCCp