The French Residence, located at No. 11 Kensington Palace Gardens, was commissioned in 1852 and completed in 1854. The Residence was designed by famous British architect Sydney Smirk, whose most remarkable works include the British Museum’s Reading Room. 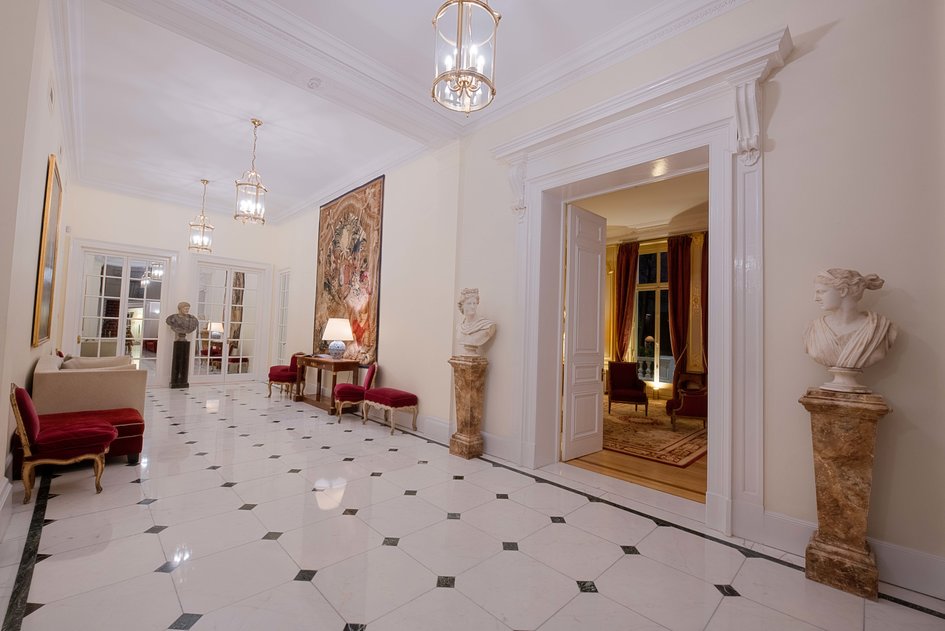 Entrance Hall The large T-shaped Entrance Hall floor was re-tiled in 1937 with white and black marble. On the walls are a pair of modern tapestries woven in the National Factory at Beauvais. One of them, from 1990, previously adorned the grand staircase of the Cour des Comptes in Paris. Several busts of ancient Roman figures, including several emperors and are placed on consoles and plinths, dating from the Regency and Louis XV periods.

Library To the right of the Entrance Hall, the Library is an ornately decorated room with an amusing detail: to one side of the mantelpiece, what looks like books are simply spines glued onto the wood, concealing a secret door leading to the Ballroom. There is an 1807 portrait of the then owner of the Aubusson factory on display, as well as a vanitas painting of musical instruments and learned books. The Library furniture is mostly of the Empire style. It includes a walnut desk, by François Jacob-Desmalter, the most fashionable cabinetmaker of the First Empire, and a walnut lattice back chair attributed to the Consulate period. An elegant Restoration period pillared clock on the mantelpiece completes the decor. 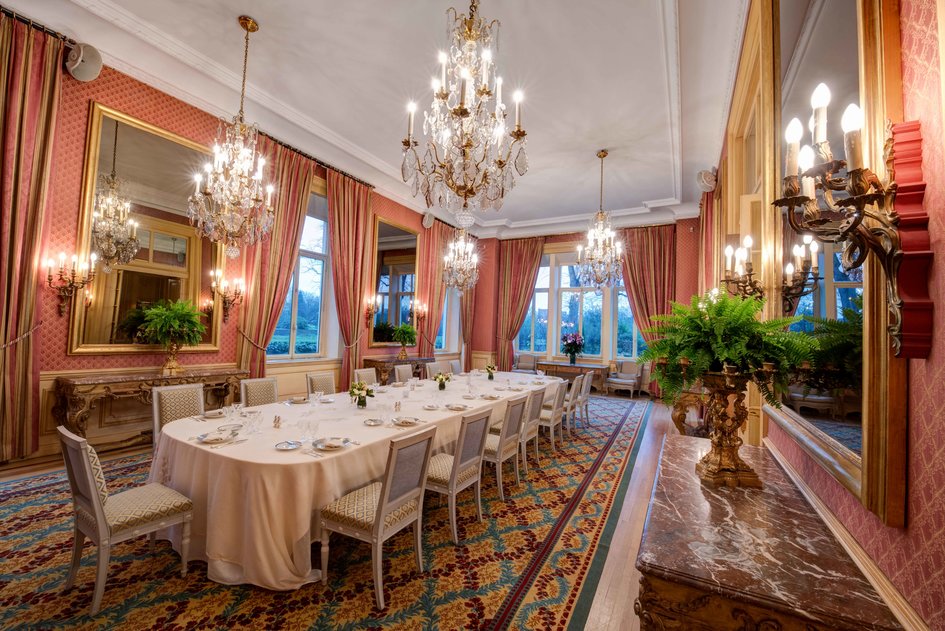 Grand Dining Room This room is located in the North wing, which was added in the 1890s. Its dominant feature is a portrait of former French Ambassador Talleyrand by Marie-Eléonore Godfroid, which dates back to the early 19th century. The Grand Dining room is adaptable, it can host up to 35 or 40 people, at either long or round tables. Below the mirrors, there are five marble tables, amongst which four are in Regency style and one in Rocaille style. These tables, above which sit four splendid chandeliers, often display table Sèvres services. 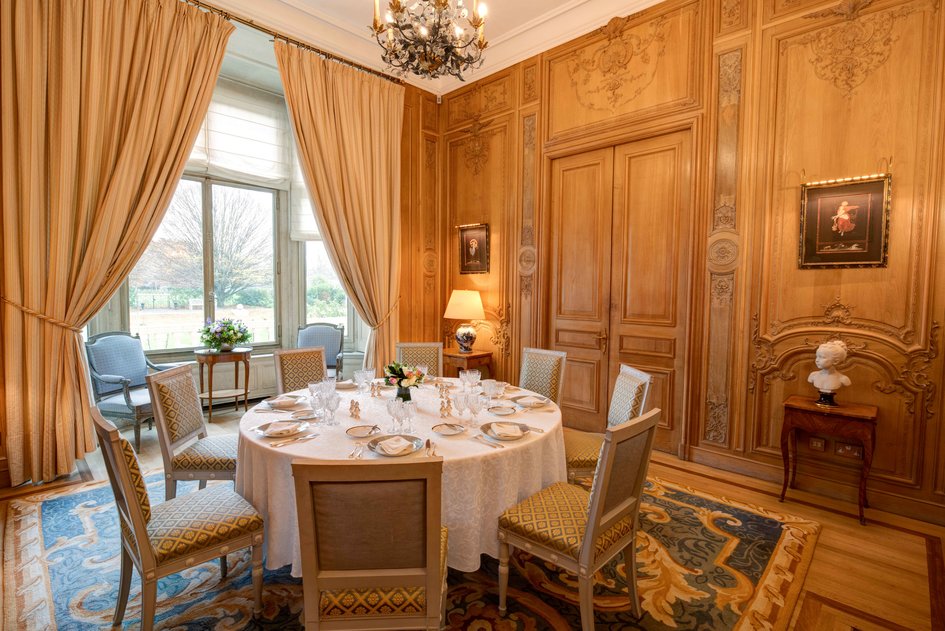 Small Dining Room The Small Dining Room is used for day to day working breakfasts and lunches given by the Ambassador. It is panelled in blond wood carved in the Rocaille style, an exact reproduction of the 18th-century woodwork destroyed in the fire of 1990. The chairs overlooking the garden are the work of Adrien-Pierre Dupain, Marie-Antoinette’s royal master cabinetmaker. These chairs are typical of the Louis XVI style, dating back to 1870. 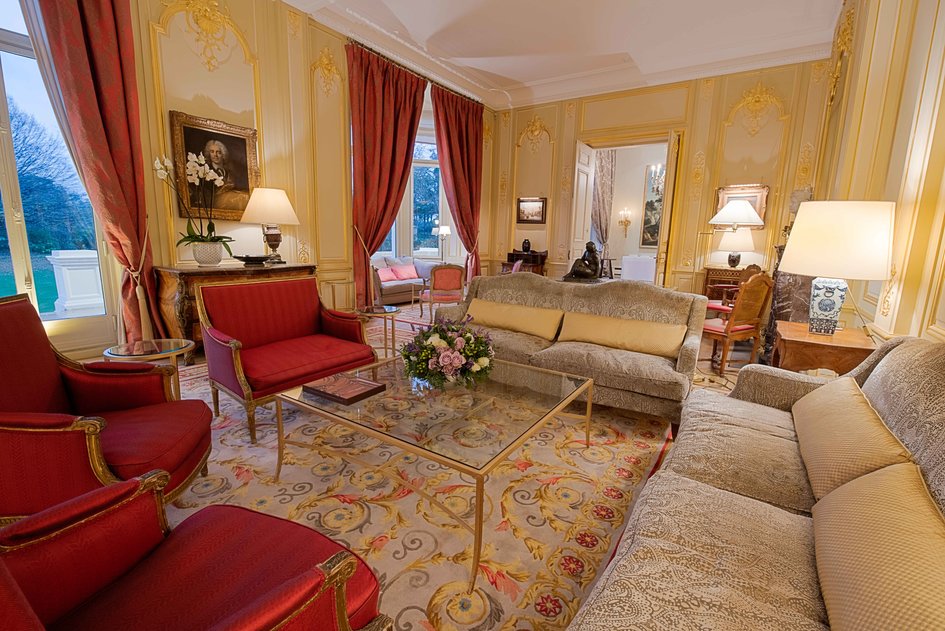 Grand Drawing Room or ‘Salon Margot’ The Grand Drawing Room, formerly known as the Yellow Drawing Room, was renamed the ‘Salon Margot’ after recent redecoration, in honour of Margot Roquette-Buisson, an interior designer for the Ministry of Foreign Affairs, who passed away in 2012. This elegant reception room is decorated in tones of gold and beige with rocaille ornamentation. As you enter, on the left you can see a head and shoulders portrait of the writer François-René de Chateaubriand, a modern copy of the 1807 original, painted by a student of David. Chateaubriand held the post of French Ambassador to London in 1822. On the right side of the door leading to the Small Dining Room hangs a painting by Emile Lambinet, a student of Jean-Baptiste Corot, and two paintings by Neapolitan painter Michele Pagano on each side of the main door. On the mantelpiece, a marble bust of a young nobleman attracts our attention, (and near him hangs one of the most valuable paintings in the Residence, a landscape by André Derain, one of the founders of fauvism). (need to check as there may be impending changes) 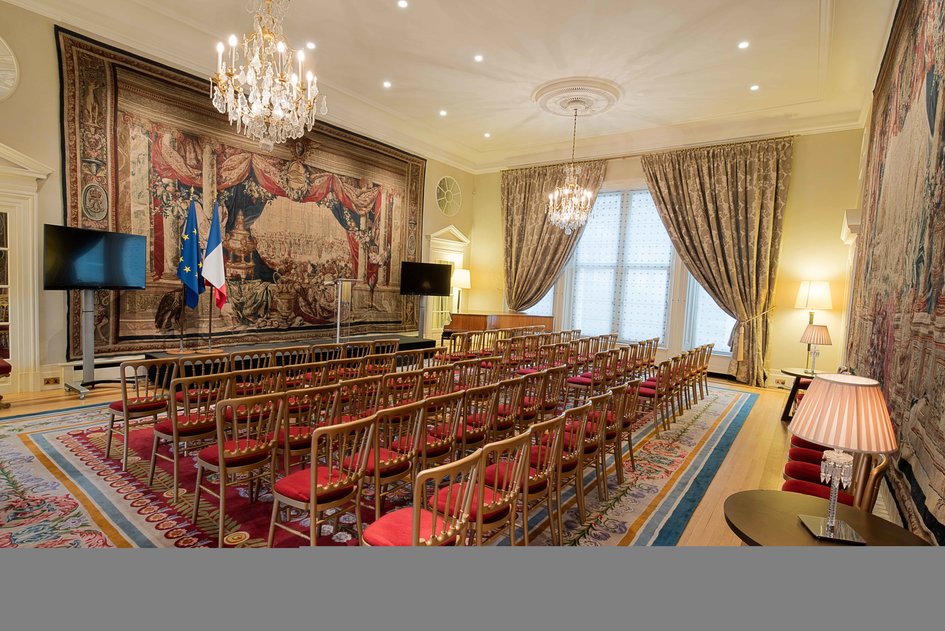 Ballroom The Ballroom runs the depth of the house, from the garden to the courtyard, and occupies the one-storey extension added to the south side in 1873 for José de Murrietta, which originally doubled as an art gallery as well a ballroom. This magnificent room was completely renovated in 2013. The renovations were led by the interior design department of the Ministry of Foreign Affairs and sponsored by Chanel and also included the restoration of the Salon Margot. Today the room is used for ceremonies, receptions and large gala dinners, and on occasions, concerts. The beautiful grand piano made by the prestigious French piano maker Ērard, was made in the Paris workshop, 1923. The furniture in the room includes various chairs and folding stools?? from the period of the Second Empire. On the walls, two priceless tapestries, woven between 1668 and 1682 at the world-renowned Gobelins Manufactory, embellish the room. They are from a calendar set of twelve from Versailles, these representing the months of February ,A Ball at the Palais Royal, and March, A Hunting Scene at the Chateau de Madrid. . On either side of the door opening onto the Grand Drawing Room are two Louis XV-style chests of drawers, each with busts of Roman emperors on top. On the left is Octavius Augustus, Julius Caesar’s adopted son, and on the right, Gordian III. Above are two famous paintings by Hubert Robert, The portico of Octavia and The Portico of Marcus Aurelius. 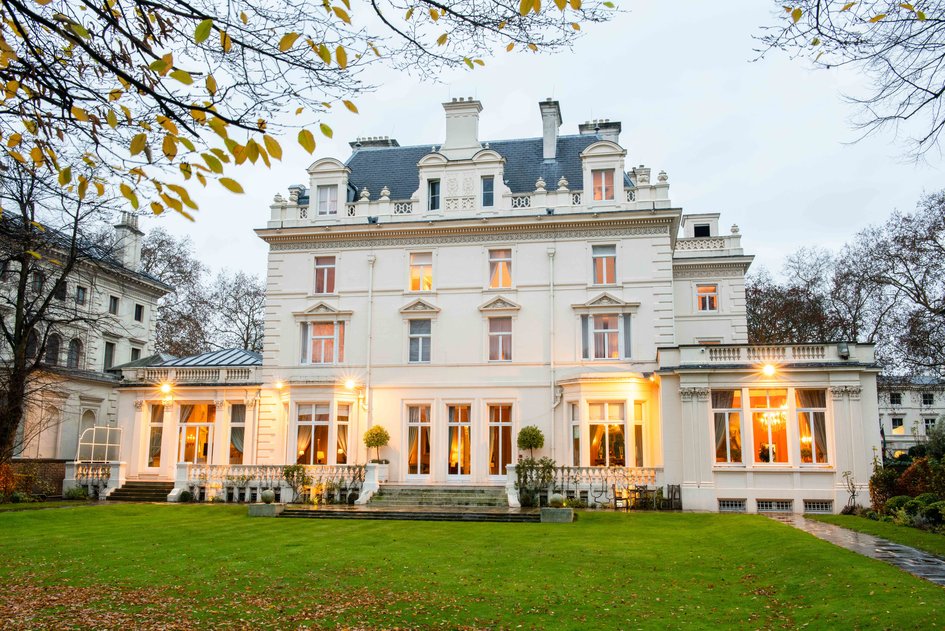 The gardens The French Residence Gardens were originally designed by Lutyens in the 19th Century and recently re-planted in 2013 with assistance from the Worshipful Company of Fruiterers and designer Gill Oliver, who has had gardens featured at the world-famous Chelsea Flower Show in London.