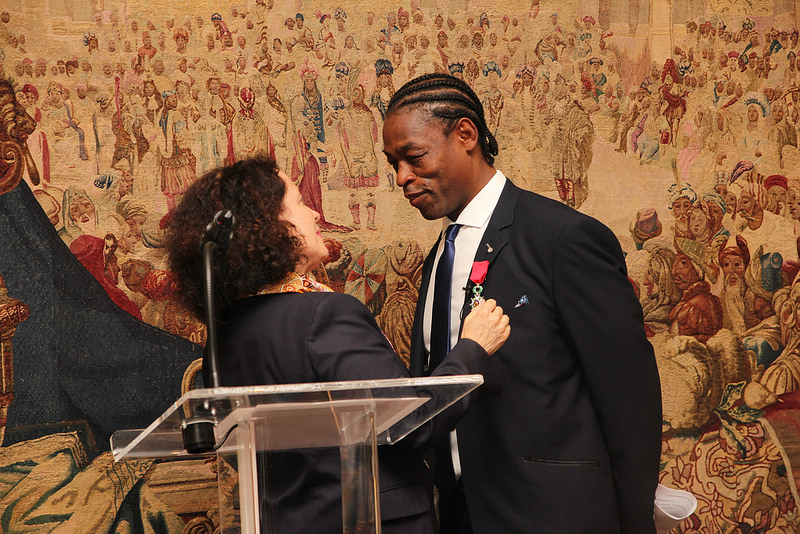 French rugby star Serge Betsen has been awarded the Légion d’honneur by Ambassador Bermann at a ceremony at the French Residence, London.

Before presenting the award, Ambassador Bermann praised Betsen for his dedication and generosity, saying:

"Rugby is clearly a sport that requires commitment sport. Players have to be brave and surpass themselves, through an ability to overcome suffering and be constantly active on the pitch."

Serge Betsen was born in Cameroon and, aged nine, moved to the suburb of Clichy in north-west Paris. He played his first competitive match for the local club before joining Biarritz, winning the French championship in 2002 - when he also won Best Player -, 2005 and 2006.

In 2004, Betsen opened the Serge Betsen Academy in his native Cameroon, a charity promoting supporting children from underprivileged backgrounds by introducing them to rugby, supporting education and improving access to basic healthcare.

Alongside other commercial ventures, in 2015 Betsen created Serge Betsen Rugby, a multi-sport coaching programme for the French schools of London.

Present at the ceremony was the mayor of Clichy as well as former coaches from his successful sporting career in France and the UK.

After receiving the award, Serge Betsen invited guests to join him in a rousing rendition of "Il est un coin de France" by Luis Mariano, a popular rugby anthem from his time at Basque side Biarritz.