Spatial Cooperation: CNES et UKSA strengthen their partnership in cooperating for the development of the programme MicroCarb. 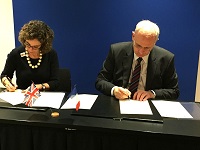 Jean-Yves LE GALL (CNES - Centre national des études spatiales, President — and Katherine COURTNEY (UKSA, Chief Executive) have signed a Letter of Endorsement for the joint execution of the programme for Earth observation microsatellite: MicroCarb. Meant to be launched in 2020, MicroCarb’s mission will be to perform a cartography of our planet, especially in assessing the sources and sinks of the major greenhouse gas, the carbon dioxide, whose steady concentration increase, induced by human activities, is the cause for global warming. The final challenge is to characterize the flows of carbon dioxide on the surface of the earth in order to measure the quantities emitted and absorbed by the eco-systems (oceans, vegetation, soil) so as to better anticipate the trends. MicroCarb will be placed on a polar orbit to ensure a worldwide coverage. This signature, made in the margin of the ESA (European Space Agency) Council meeting at ministerial level held in Lucerne earlier this month, contributes to reinforcing and sustaining the framework agreement established among the two partners in January 2014. Their respective responsibilities and roles with respect to the development of MicroCarb will be specified by an “Implementing Arrangement” whose signature is to take place at the beginning of 2017.