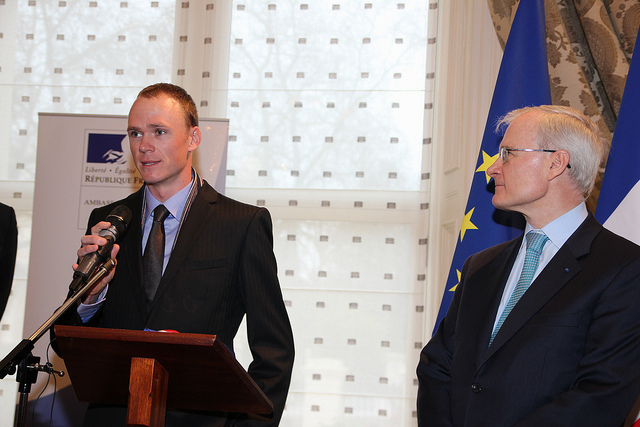 There is no other race quite like it. 3,500 kilometres long, three weeks of competition, and with an audience of nearly 3.5 billion people each year, the Tour de France is the world’s largest annual sporting event. From tomorrow, on its 101st edition, the Tour will be returning to British shores.

This will be the third time Britain has welcomed the Tour. The first time, in 1994, saw Dover and Portsmouth host stages four and five as part of celebrations to mark the opening of the Channel Tunnel and the increased proximity of our two countries. The Tour returned to Britain in 2007 with London invited to host the ’Grand Départ’ and a second stage running from London to Canterbury.

With Yorkshire’s Brian Robinson the first Briton to win a stage of the Tour de France, in 1958, it is somewhat fitting that Yorkshire will host this year’s ‘Grand Départ’, the opening race of the Tour, in Leeds on 5 July. Two further stages will take in York to Sheffield, and Cambridge to London, with an exciting sprint finish expected on the Mall on 7 July. I will be returning to Yorkshire with great excitement to attend the first stage from Leeds to Harrogate. I have been several times since Yorkshire first bid to host the ‘Grand Départ’ and am in no doubt the people of Yorkshire will be offering an exceptional event. It is a wonderful coincidence too that, in the same year as Her Majesty The Queen’s state visit to France as part of the D-Day commemorations, the Tour route will take in Buckingham Palace on its way to the finish line on the Mall. In Paris Her Majesty also greeted cyclists from the charity Help for Heroes.

This year will also be the longest the Tour has spent in Britain, and reflects both the popularity of cycling here and the success of Britain’s cycling champions, with Bradley Wiggins the first British rider to win the Tour de France, in 2012, followed by compatriot Chris Froome in 2013. I had the great pleasure of inviting Chris Froome to the French Residence late last year, and was struck by both his height and humility.

But this very special edition of the Tour will also serve to commemorate the centenary of the First World War. Seven of the Tour’s 21 stages will pass through the 1914-18 Western Front, from the Nord region down to the Vosges, along France’s eastern border. Stage six will include a stretch of the Chemin des Dames, the theatre of a major battle in the spring of 1917 and the Patrouille de France (the French Air Force’s aerobatics team) will escort the peloton on to the Champs Elysées on the final day, 27 July. There is an extensive programme of events taking place across France this year to commemorate the Great War and remember the fallen, if you don’t have a roadside seat in France this July.

Broadcast across 188 countries, and with 2,000 journalists representing dozens of nationalities covering the race, the Tour 2014 will be a unique opportunity to remind the world how far we have come since the horrors of the trenches. The glowing relationship between France and Britain, and our mutual love of cycling are treasured signs of the peace in our times.

Cycling in France and visiting the stage towns

Chris Froome at the French Residence