Taking place between 18 January and 18 February 2019, the world’s first totally online French-speaking film festival features a programme of 10 short films, 10 feature films in competition, and a selection of films screened out of competition 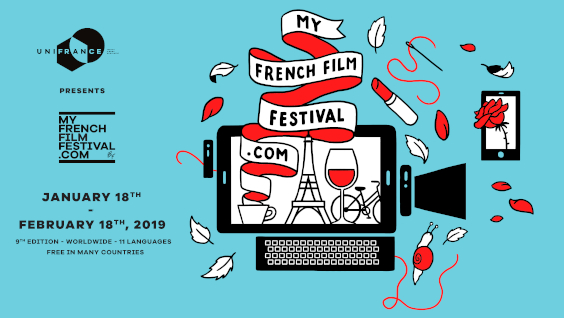 After a record 2018, with more than 12 million viewings of the selected films, the best of new-generation French-speaking cinema is back and available online.

The MyFrenchFilmFestival.com platform is adapted to all media (computers, tablets and smartphones) and is available in nine languages. Internet users can also find the selected films on 50 VOD platforms which broadcast the festival around the world.

Featuring comedies, thrillers, romances, dramas and classics, the month-long festival has allowed Internet users to enjoy films reflecting the diversity of French-speaking cinema for nine years. Discover the films selected for the ninth edition of the festival.

The short films are free all over the world and the feature films are pay-for-view (€1.99 per film and €7.99 the set), except in Africa, India, Latin America, Poland, Romania and Russia, where the festival is free this year.

The Filmmakers’ Jury is composed of Coralie Fargeat, Houda Benyamina and Mikhaël Hers from France; Kim Nguyen from Canada; and Jaco Van Dormael from Belgium. Viewers are asked to rate the films and post their comments on the website. The Audience, Filmmakers’ Jury and International Press Prizes will be announced at the end of the festival.

MyFrenchFilmFestival is organized by UniFrance, the agency responsible for promoting French cinema internationally.