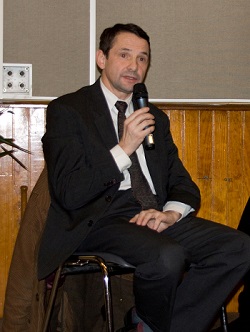 For a year between June 2014 and June 2015, Mr Mandon, 57, was the Minister for Public Services Reform, reporting directly to the Prime Minister, Mr Manuel Valls.

Member of Parliament twice from 1988-93 and 2012-14, Thierry Mandon held several high elective positions in the region of Essonne (South of Paris) and was Mayor of Ris-Orangis between 1995 and 2012.

He has a thorough knowledge of the Higher Education and Research world. In 1998, he was the Founder Chairman of the dynamic R&D&I biocluster Genopole in Evry (focused on genetics, genomics and biotechnologies), a position he held until 2014. Furthermore, he sat on the Executive Board of Université Paris XI and the Engineering school specialized in telecommunications (Telecom SudParis, formerly known as INT Evry). He is also well aware of the funding public policy as he was rapporteur for the Higher Education and student life budget in 2013.

Speaking for the first time yesterday, he said he was delighted to take charge of the Higher Education and Research within this government, a sector “close to his heart”. He also declared that he would work toward modernising public services in this sector, the ultimate aim being “quality for each student and researcher”.

Mr Mandon’s appointment has been positively received within the higher education sector.