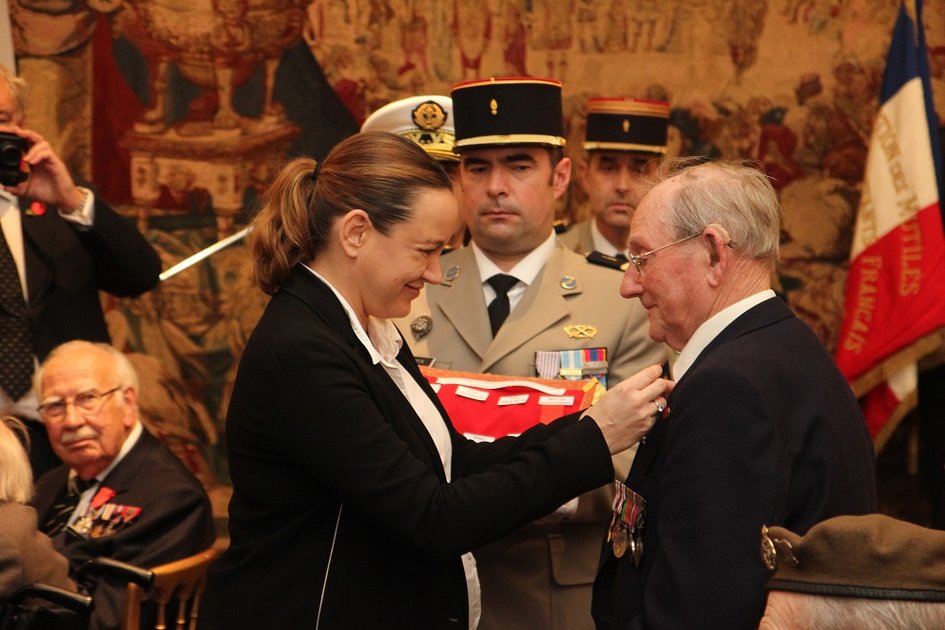 Twenty World War II veterans (19 British and one Australian) were presented with the Légion d’honneur, France’s highest distinction, during a ceremony at the French Ambassador’s Residence in Kensington, London.

The medals were presented by French Minister Axelle Lemaire and Ambassador Sylvie Bermann in the presence of the Australian High Commissioner to the United Kingdom, the Hon. Alexander Downer AC, and the Minister of State for the Ministry of Defence and Deputy Leader of the House of Lords, the Rt Hon. Earl Howe.

The veterans were honoured for their role in securing France’s liberation during the Second World War, many of them having taken part in the D-Day Landings in June 1944.

Axelle Lemaire said: "On behalf of the French government, I want to let you know how very grateful our nation is to you."

Ambassador Bermann said: “I feel privileged and incredibly moved to award these veterans with France’s highest distinction, which is our way of thanking them for their tremendous service to our country in the Second World War.

“Just as today we remember the fallen of the First World War, so we shall never forget the courage of those who fought for France’s liberation over 70 years ago. To them, France owes its freedom.”

Royal Navy ex-serviceman Cornelius Snelling, 92, was among those to receive the medal. On D-Day, he sailed between Portsmouth and the Normandy coast escorting landing craft and ships.

He described arriving at the port of Arromanches: “I can remember vividly the noise of gunfire and shells around me, and I remember feeling sad for all the men who were landing on the beaches.

“We didn’t know how successful the landings had been until later. At the time, it was like looking into the unknown.”

Mr Snelling said: “It is a very great honour to be receiving the Légion d’honneur from the French government.

“My daughter and son-in-law have a cottage in Normandy and I’ve enjoyed many holidays there over the years. On D-Day, I never imagined I’d go on to have so many happy times there.”

Mervyn Kersh, 90, was a sergeant in the Royal Army Ordnance Corps. He landed on Sword Beach on 9 June 1944, after nine out of 10 men from his unit had lost their lives on D-Day.

Mr Kersh said: “It was very frightening, with shells going overhead in both directions. As we got closer and closer to the beach, we didn’t know what was going to happen.”

Mr Kersch described how he raced up cliffs to be greeted at the top by French villagers. Later, his unit was forced inland under sniper fire and ended up taking shelter in a ditch whilst machine guns and bombs went off around them.

After D-Day, Mr Kersh advanced through France, Holland and Belgium before arriving at the Bergen-Belsen concentration camp in Germany, which was liberated by British troops in April 1945.

Speaking about Wednesday’s medal ceremony, Mr Kersh said: “I am very excited to be receiving the Légion d’honneur. It is a tremendous pleasure and I consider myself fortunate to be here today to receive it.”

The ceremony was the latest in a number of medal ceremonies that have taken place since the 70th anniversary of D-Day in June 2014, when President François Hollande pledged to honour all those British veterans who had served in France during the war.

Earlier that day, the French Ambassador presided over a ceremony of remembrance at Brockwood Cemetery in Surrey, where servicemen from the Free French Forces are buried. She later attended a ceremony in Grosvenor Gardens, central London, at the statue of Marshal Foch, Commander-in-Chief of the Allied Armies at the end of World War I, in the presence of the French Minister of State for Digital Affairs, Axelle Lemaire, and the Deputy Lord Mayor of Westminster.