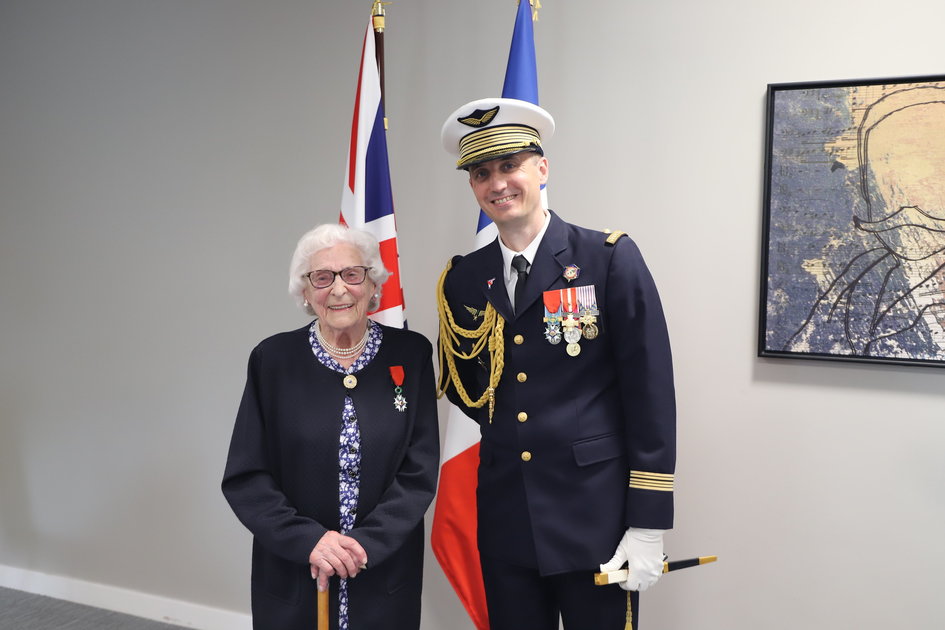 On 3 July 2021 in Birmingham, Mrs Charlotte “Betty” Webb MBE was presented with the insignia of Chevalier in the Ordre de la Légion d’Honneur by Colonel Patrick Bryant, France’s Air and Space Attaché in the United Kingdom.

She was awarded the decoration, France’s highest distinction, in recognition of her work in the Auxiliary Territorial Service stationed at Bletchley Park during the Second World War, where she was involved in efforts to decode messages from Germany’s Enigma machine.

As a German speaker, Betty Webb joined Bletchley Park in 1941, at the age of 18. The mass of information revealed in the messages she deciphered enabled the Allies to considerably improve their knowledge of Nazi defence systems in the run-up to the Normandy Landings. She then moved to the department responsible for intercepting Japanese messages, before leaving for the United States to support the Pacific War effort. Her work remained a secret until 1975.

The ceremony follows President François Hollande’s decision in 2014 to award the Légion d’Honneur to British veterans who helped liberate France during the Second World War. More than 6,000 medals have been awarded, and President Emmanuel Macron visited London in June 2020, on the 80th anniversary of General de Gaulle’s Appeal, to present the Légion d’Honneur to the city of London.

During the ceremony in Birmingham, held at the Edgbaston Park Hotel in the presence of France’s Honorary Consul in the city, Mme Cécile Le Duff, and members of GCHQ, British Health Secretary Sajid Javid paid a personal video tribute to Mrs Webb.